Often referred to as  the “Poet Sandal Maker to the Stars”, is an Alumnus of Parsons School of Design (BFA-1985/ MFA-1987) and 3rd generation sandal maker who makes unique, classy & bespoke leather sandals (based on ancient Greek models and his own designs) for celebs, royals and lovers of beauty.

He was introduced to art, poetry and sandal making, at a very young age, by his mother Sophia, niece of renowned fashion designer Jean Desses, and his famous father Stavros Melissinos aka “The Poet Sandal Maker of Athens”. He also plays the piano and loves to compose melodies for his plays and lyrics.

His figurative art is a colorful fusion of surrealism, fauvism, pop art, German expressionism and cubism, in a setting inspired by Ancient Greek mythology. He also creates 3-d art- structures (figurative and non-figurative) that are in fact colorful and very dynamic floor or wall sculptures.

Melissinos’ – quite often – narrative poems use Ancient Greek Mythology as a stepping ground.

Despite his colloquial language and up-to-date way of writing, he utilizes old poetic techniques, like flowing meters and rhymes and loves to deal with human psychology and philosophical questions. His latest book “Oedipus in Bed and Other Poems” is available in his atelier.

…His musical comedies explore, in side splitting scenes, the inescapable human folly that plagues ingenious and foolish individuals alike -his musical comedy “Bacchus” was a smash hit.

Poet & 2nd generation sandal maker, since 1920. He acquired fame as “The Poet Sandal Maker of Athens” for introducing to the modern fashion world his Ancient Greek leather sandals that made a sensation in the mid-50s and started a fashion trend that is still alive today.

His Poetry, which is lyrical, tends toward an Omar Khayyam romanticism and is at once philosophical and simple.

“The Athenian Rubaiyat” is Stavros Melissinos’ Greek version of Omar Khayyam’s, Rubaiyat and has been translated into English by his son Pantelis Melissinos.

The man who started it all, by establishing the Melissinos footwear business, when he opened up, in 1920, his ” GEORGIOS MELISSINOS SANDAL WORKSHOP”

Back in his day, his footwear workshop, in Plaka, catered to the royal family of Greece and other notables. 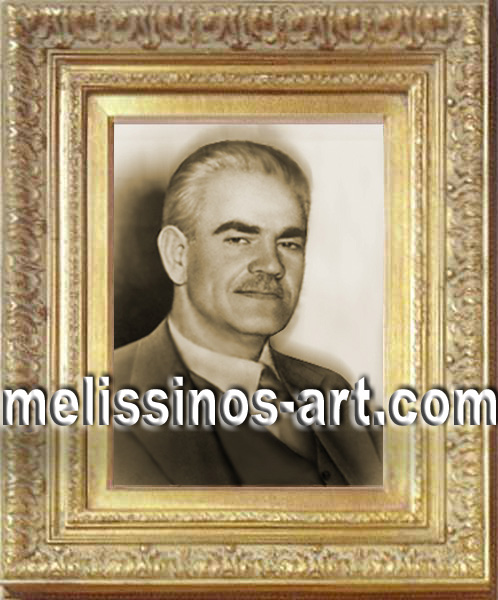 Georgios Melissinos produced sandals and dressy shoes for  both men and women but was famous for his hiking shoes.

Although he ran a sandal workshop he was famous for his hiking shoes.

His all-leather and super comfortable hiking shoes -according to  many accounts of old people that used to wear them in their youth- were famous throughout Greece, the way popular sport shoe-brands are today.

Mountain Hikes were all the rage

It was very trendy back then to take to the mountains, hiking in groups and socializing in nature, surrounded by trees, instead of jogging alone, on polluted city streets, like many people do today.